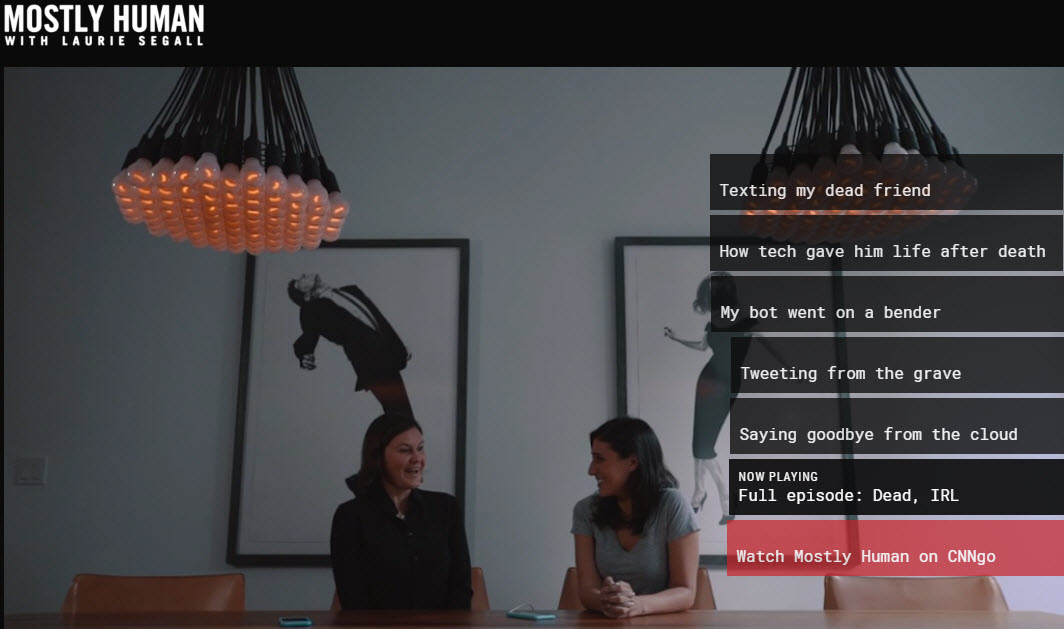 The show begins telling the story of Eugenia Kuyda who created a conversational chatbot of her friend shortly after passing away. The story spread across the web last year and I covered it in my story proclaiming how we will live forever through bots and AI in the near future. She was uniquely qualified to do this as the technology was already part of an AI startup she created called Replika which recently released its iOS app. I along with many folks drew a comparison between what Eugenia created and an episode of Black Mirror. Those comparisons continue to surface now that Eugenia did this interview.

Laurie then moves on from an artificial chatbot to speak with James Norris who created Dead Social. The website provides resources on a wide range of topics like helping someone prepare how they want their digital lives to be managed after their death along with how to record messages to be delivered after you die.

It has been stated that soon the dead will outnumber the living with regards to Facebook user profiles. Several years ago Facebook began building a team around the aspects related to this reality and this led to the creation of the Legacy Contact feature which let’s you assign an executor for your account after you die. Laurie interviews Vanessa Callison-Burch who leads that team.

The show goes on to tell some other stories and aspects around digital legacy. It’s a well produced show that provides a great way to learn about some of the many aspects surrounding this topic that will continue to become top of mind as these issues continue to present themselves in all of our lives. You can learn more about digital legacy on the resource guide.

This article was originally published on Lifestream Blog

Learn how to protect your personal data, ensuring it never gets lost or destroyed and can be passed on to future generations. Learn more at the about page.

Made using WordPress, OceanWP, Elementor, and hosted at Siteground.